Hex cap screws are recognized by the washer faced bearing surface under the head. They are partially threaded with an unthreaded area referred to as the "grip". The minimum thread length is measured as twice the diameter plus 1/4" for screws 3/4" in diameter up to 6" long inclusive. These screws are cold form manufactured with rolled threads. When screw length is too short for the minimum thread length rule to apply, they shall be fully threaded.

Screws with a length longer than 6" have a minimum thread length of twice the diameter plus 1/2". The3se larger screws may be either hot or cold headed and the threads may be cut, rolled, or ground at the manufacturer's option. Hex cap screws are available in various grades of steel.

These hex bolt and nut sets are ideal for fastening metal to metal and metal to timber. They are commonly used for securing the two objects where there is access to the backside to install a nut..

Hex bolts, commonly called hex head cap screws, are bolts with a hexagonal or six sided head. A hex cap screw is actually manufactured with tighter tolerances and can be used anywhere a hex bolt is used. A common feature on a hex cap screw is a washer surface directly under the head which creates a better seal.

Hexagonal bolts is the most widely used class of bolts. Its A and B grade bolt for important, high precision assembly and withstand greater shock, vibration or alternating load occasions. Its C-level bolt for the surface is rough, the assembly precision less demanding situations. Threaded bolt, are generally common thread, self-locking bolts West common thread is better, mainly used for thin-walled parts or to withstand shock, vibration or alternating load occasions. Occasions are generally made on the part of the thread bolt, Full thread bolt nominal length is mainly used for short and require longer threaded bolt

1, connected by force, there are common and have the articulation hole. Articulation hole bolt hole to size and fit, when used by the lateral force.
2, according to the head shape hexagonal head, round, square head, countersunk head, and so the general Shen head with a place in the smooth surface is not required to connect the projection, because countersunk head can be screwed into the part in. Round to be screwed into the head part in. tighten the square head of the force can be a little bigger, but large in size. hex head is the most common.
In addition, to meet the needs of the lock after installation, there is a hole in the head, the stem portion with holes, these holes can not screw loose when subject to vibration.
Some did not bolt threaded rod to be meticulous, called the waist bolt. This bolt is conducive to change by force coupling.
There are special high strength bolts on steel. The head will become bigger and more dimensions have changed.
Another special use of: T-shaped slot bolt, with most of the machine tool fixture, special shape, to cut off the side of the head bolt for machine and fixed ground connection, there are a variety of shapes, U-bolts. , as described above, and so on.
There are special stud welding, a threaded one did not, you can weld the parts, tighten the nut on the other side directly. 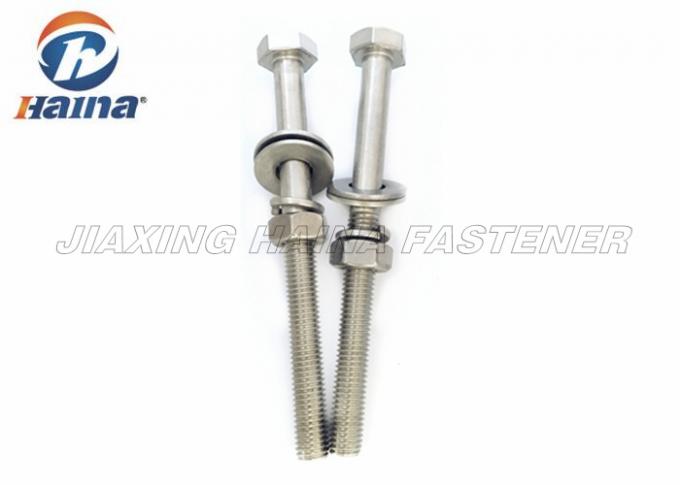 Sample: Free sample can be sent for test